Cat Vision – how they see in the dark.

Home•Cat Vision – how they see in the dark.
Previous Next

Cat Vision – how they see in the dark.

Whilst cats certainly have excellent night vision typical of nocturnal hunters, this doesn’t mean they have the ability to see in total darkness. Their eyes have the ability to make use of low levels of light, but some amount of light is still required. What you and I see at twilight, is about as good as what your cat can see outside at night.

How you Cat’s Eyes Work
Typical of carnivores, cat’s eyes are set forward on the head and aim straight forward for an optimum three-dimensional image. Looking straight ahead there are 120 of binocular vision, with another 80 on each side – a remarkable total of280 compared with the less than 180 view available to humans.

Ligaments inside the eye enable the lens to move to focus on objects some distance away or on something closer at hand, though in fact, cats’ eyes are not good at close-up work. They work best with objects between two to six meters away.

The cat’s ability to see in dim light is due partly to the flexibility of the muscles controlling the iris – the membrane that opens and closes to reveal more or less of the pupil. In bright light for example, when a cat is in direct sunlight the iris reduces the pupil to a mere slit, protecting the inner eye from light damage but retaining vision. At night, however, the iris muscles work in reverse, expanding the opening to as much as 0.5 in (12 mm). This allows more light to pass through to the retina at the back of the eye, thereby increasing the amount of information passed to the brain. 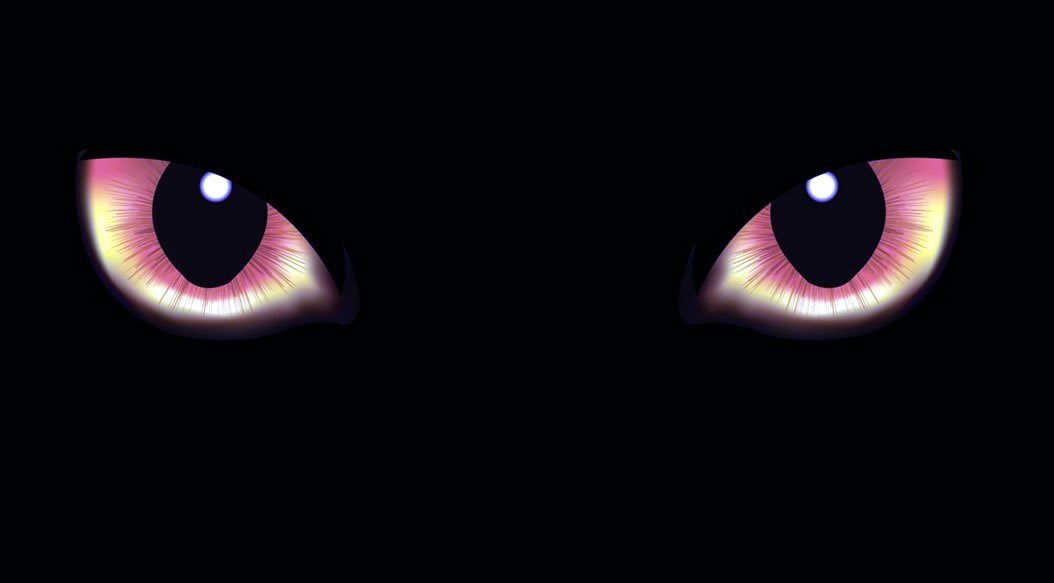 Seeing in the Dark
A night, another distinctive feature of the cat’s eye comes into play. This is the tapetum lucidum, a reflective layer on the surface of the retina which increases the sensitivity of the retina and enhances the received image. It is the tapetum lucidum that produces the startling reflection of cats’ eyes caught in a torch beam or a car’s headlights, and it is this effect, of course, which has been copied by road engineers for highway markings. The tapetum lucidum is, incidentally, not exclusive to the cat family. It is present in many other nocturnal animals. But although the real cat’s eye can gather in a great deal of information in poor light, it is not very detailed information.

Nocturnal vision is fuzzy and without detail.

For the cat, this does not particularly matter, because what it is mainly interested in is the movement of possible prey, which it can easily detect especially when assisted by the senses of smell and hearing.

The Distinctive Cat Eye
Cat’s have a third eyelid (the haw) arranged to flick diagonally across the cornea or surface membrane of the eyeball. This flicks continually when the eyes are open, but if a cat is seriously ill it will often show ‘haws up’ that is with the haws immobile across the corneas – sometimes so far across that the cat is temporarily blinded. In normal health the haws help, with the true eyelids, to lubricate the cornea.

The ability of a cat to ‘stare its owner out’ is well known, and it seems that a cat can stare fixedly at an object for an inordinate length of time. It is often seen when a cat is staring out of the window, perhaps at birds or windblown leaves in the garden. This is part of the hunting instinct. Be sure that under these circumstances no movement within the cat’s field of vision will go unnoticed, and if it were in the open air the cat would already be planning to spring and pounce.

Siamese cats may be subject to a genetic fault which produces double vision instead of the usual stereoscopic image. The cat’s attempts to correct this result in the characteristic Siamese squint.

Seeing in Colour
Can cats see in colour? Certainly, they have nothing like the colour perception of humans, but it is equally certain that they have some means of distinguishing some colours, as many owners can testify. As carnivores, their eyes are more attuned to detecting movement as opposed to colour. One school of thought is that they can distinguish between red, blue, and white, but green, yellow, and white all look grey.

Strangely enough, cats’ eyes, or rather their irises, can come in a wide range of colours, including red, blue, green, and gold. These have no particular relevance to the cat’s ability to see, but in cat fancy they assume some importance as only specific eye colours are permissible for certain breeds and coat colours.